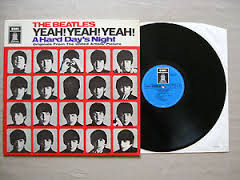 This is my personal choice of the greatest ever album. I won't bother going into details of the actual LP as this has been covered billions of times and you already have - and love - it. Right?
For me this is the album that started EVERYTHING. My Grannie gave this to me on my 6th Birthday in 1974. May she rest in peace. I, at that point, assumed The Beatles were the ONLY  Pop band that had ever existed and had no idea they broke up in 1970. In fact I had never even heard of 1970!! So I woke up at 5am on my birthday, totally over-excited. I ripped open the presents (of course) and there it was, the self same album you can see in the photo. I put it on -  no idea of what to expect. I was totally blown away. Previously my little compact record player had played Fairy stories and stuff like Peter & The Wolf, but this blew all that away for ever. That first chord on side one and then the rush of all those great songs, wow......too much!I played that album daily for years and totally wore that copy out, in fact before the age of ten I refused to play any other music bar the Beatles. Except Wings, because that was close (ish). But that was it. On vinyl, only The Beatles were allowed. I finally succumbed to other musical pleasures, which has led me to what I am doing these days, but that album sure is the greatest ever.