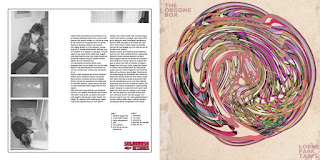 The new ORGONE BOX album is out in about March 2016. Entitled "THE LORNE PARK TAPES" it features 4 track recordings from the early 90s spanning Rick sojourn in Markus Holler's SILENT BLUE, his time in the later incarnation of that band GREEN TAMBOURINES and finally to the recordings of the 1st Orgone Box album. This record will be limited to only 250 copies worldwide, more details to follow in due course. Track listing is as follows, please note that several tracks are different versions to the ones found on the THINGS THAT HAPPENED THEN CD that Bill Forsyth issued. (the Image above is a rough paste up of a sleeve idea we've had, the final product will be a little more polished)