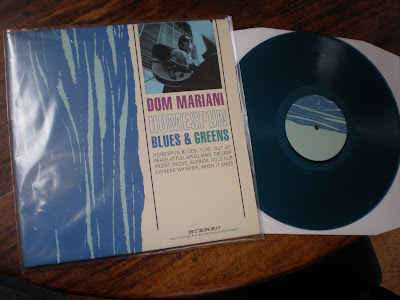 DOM MARIANI - "HOMESPUN BLUES & GREENS" (SUGARBUSH SB026), is finally out on vinyl. Limited to only 300 copies worlwide on DEEP BLUE VINYL. This amazing album, recorded over a 2 year period in the early 2000's, stands alone as the one true Dom Mariani solo album in a catalogue spanning many changes.
Having forged a career fronting Australian garage rock legends The Stems, as well as respected powerpop combos, The Someloves and DM3, who released 3 critically acclaimed albums throughout the '90s, Mariani used some well earned down time to put together a diverse collection of tracks capturing the influences and sounds which drove him to musical distraction on one long playing platter.
Much like the Someloves sole album "Something Or Other", which gained positive reviews worldwide for its melodic collection of well produced tunes, "Homespun Blues and Greens" follows a similar trajectory in that the songs were pieced together over a period of time utilising different musicians. Released with little fanfare or promotion at the time, it took a road trip in October 2003 from his home in Fremantle in Western Australia with friend and co-writerJeff Baker to Mitch Easter's (R.E.M., Let's Active, Velvet Crush) Fidelitorium Studio in Kernesville, North Carolina to see the album take its final shape.
Referred to as Dom’s lost album, ‘Homespun Blues and Greens’ is a fine collection of songs dealing with personal themes set to a soundtrack of pure power pop melody, sizzling guitars and pop dripping vocals.
It would also be Dom’s last real pop album as he went on to explore other musical genres. SOLD OUT!