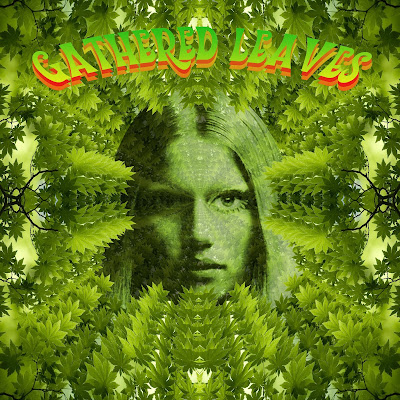 VARIOUS ARTISTS - "GATHERED LEAVES" (SUGARBUSH SB023), this is a really special album out on our own label. In case you wondered what had happened to SB023, here is the answer. I held this one back to coincide with the Autumn/Fall of this year. This ultra limited pressing (only 200 made) celebrates the music released and championed by the great 80s to 00s Psych fanzine THE PTOLEMAIC TERRASCOPE. Founded and run by NICK SALOMAN (aka Bevis Frond) and the legendary Phil McMullen this great mag dug up outsider music wherever it existed but also released limited edition CDs with the magazine. So here is a 2nd volume of collected works issued here for the 1st time on vinyl! The sound is beautiful considering the recordings are old and come from a variety of sources. It also represents a "lost" era in music: True 90s & 00s modern day Psychedelia. Not a retro post-Pebbles scene which thrived in paralell at the time but true deep British and American outsider Psych, a mine holding a treasure trove of music that really needs to be explored further. You can start here! The track list is:


On lovely coloured vinyl and only 200 copies. With Bevis Frond / Green Pajamas / Hood / Sharron Kraus / Damon & Naomi and others. (all prev. unreleased on vinyl) £19.99 inc p&p