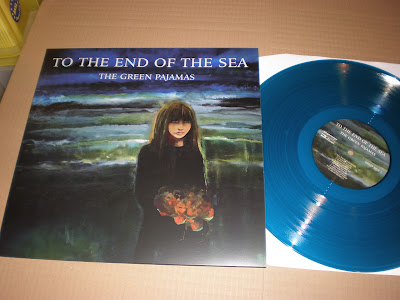 THE GREEN PAJAMAS - "To The End Of The Sea" (SUGARBUSH SB029), well Jeff Kelly has done it again. There is obviously no reigning in this man's talent and at a stage in his musical life where the likes of Lennon, McCartney, Alex Chilton and other greats had basically started resting on their laurels and stopped making great records. Not our Jeff! With this record, the band's latest album, he has possibly made the finest and most balanced record of a long and glorious (as well as cult-like) career. It is the musical equivalent of a lengthy piece of finely stitched tapestry as the songs weave into one another and musical themes cascade from dark melancholia and longing to joyous peaks. On what must be a shoestring budget the band have made a record, no doubt helped by modern technology, that would have stood proudly besides Sgt. Pepper and, had it been released in that psychedelic summer, would be talked about in hushed tones of reverence by cognoscenti of all things fabulous. This record is great and while we are only a tiny label we do hope and wish that someday it will be spoken of in just such a way. Limited to only 350 copies it will be hard to reach the great wide world on vinyl only but one can only hope that the sounds created here find another, broader, audience now and forever. Price includes postage!

To listen please play this: