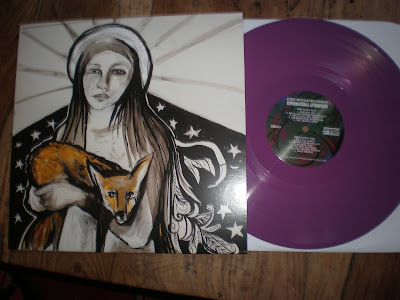 THE GREEN PAJAMAS - "SUPERNATURAL AFTERNOON" (SUGARBUSH SB041), a brand new album from Seattle's finest band, and certainly its most consistent - now releasing records for over 30 years. This is a singles (45s) sampler of sorts pulling together various single releases of the past twenty or so years. Starting with the sublime "January Girl" and stampeding through such classics as "Big Black Storm, "Raise Ravens" & " The Red Red Rose" this album sounds like a cohesive work in its own right and stands as an ALBUM as opposed to a random selection of 45s tracks. Jeff Kelly's work rate is astonishing and it is, frankly, criminal that a band with such sheer talent and genius is not feted around the world and playing to huge audiences. I am moved and amazed that Jeff keeps up such an incredbly high standard of work and one can only assume that, as an artist through and though he is somehow COMPELLED to do so. Lucky us, I say.
In the meanwhile tiny labels such as us are doing our bit to spread the music and at least release it on a format that will outlive all of us, so that future generations will pick this album up in a junk shop (isn't that the best place for lost gems?) and discover it all for themselves all over again. There is not justice in this world but there is great music, and this IS great music. Buy it, only 300 copies (on purple wax, no less). £19.99 including postage anywhere.