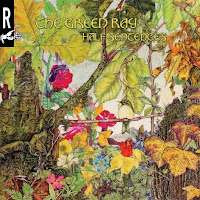 Sugarbush Records have a few new albums out, all on limited coloured vinyl. They have rereleased the debut album by the KONTIKI SUITE  “The Greatest Show On Earth” (300 copies) that we reviewed a couple of months ago, when it was released by Sunstone records, selling out very quickly. They have also released the brand new THE GREEN RAY album “Half Sentences” (200 copies) which was released by Reckless on CD last month, which we also reviewed in September.  This one decorated with terrific cover art by the brilliant west country artist John Hurford.   Sugarbush have also rereleased the wonderful TRAPPIST AFTERLAND album “Afterlander” in an edition of 200, this is a highly collectable record that was released last year in an edition of 99 copies again by Sunstone. Selling out on the day of release and currently going for crazy money, get in quick before they again sell out. (This one comes highly recommended by Phil!)

Talking of Phil's recommendations, Sugarbush have also released a new record by THE GREEN PAJAMAS. 'Supernatural Afternoon'is available on 300 purple vinyl copies.   Collecting various 45s, released over the years the prolific Pajamas, deliver a cracking new cohesive record, which could well be their finest to date and if you don’t have any of their previous records this one would make a good place to start.
'January Girl' is a heart warming wintery tale, a sublime mid paced rocker that kicks off the record with a tune that would have suited Tom Petty down to the ground.  “Big Black Storm”(single version) sees Jeff Kelly the leader, singer and songwriter proving what a great songwriter he is, a great searing lead guitar, underpinned by a driving rhythm section which is augmented by some fine violin playing.  “Who Is the Girl” (version2) arrives on a bouncy piano motif, with Jeff’s questing lyrics concerning dying stars, is over far too soon. “Supernatural Afternoon” allows the band to stretch out a bit and contains some really memorable lyrics like ‘Witches cradle by a Haitian moon, on a supernatural afternoon’ which is the song’s refrain, some blistering lead guitar spluttering all over the song proving also what a fine lead guitarist Jeff is. “The Jailer’s Song” closes out side one, over a twinkling music box, sinuous bass and more of that big, slightly fuzzed lead guitar, this song clearly being placed here to make you flip over to the other side.
Side two begins with the classic “Kill the Power” showing some Celtic influence, weaving over a Crazy Horse rhythm section, a stomper of a song, delivered impassionedly by Jeff, who also provides some strong melodic guitar lines.  “Red Bird (single version)” is a catchy rock song with pop sensibilities and again I’m reminded of Tom Petty by Jeff’s vocals.  “Ancient Lake” slows things down and finds our protagonist ruminating on time, with nature providing a balm, some medicine for the soul if you like.
“The Red, Red Rose” (song for Phoebe Prince) brings up the tempo again, and has long been a favourite, a harrowing story of a young girl hanged in her school clothes on a January afternoon from the gallows. The record ends with the brilliant “Raise Ravens” a string infused gem, gently rocking throughout with some fine melodic guitar picking out the verses. This is a very strong album, concise and accessible. (Andrew Young)