PUGWASH "ALMANAC" on orange or white vinyl, LAST COPIES!! Get them here. 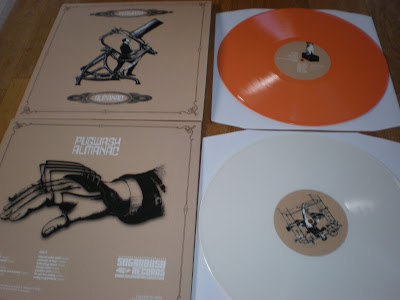 PUGWASH - "ALMANAC" (SUGARBUSH SB028), Pugwash' incredible 2nd album is released for the first time on vinyl. 250 copies on orange vinyl and 250 copies on white vinyl, so take your pick! They both look great. The converted will of course know what a classic this album is. For those who have never heard Pugwash, a snippet from one of the hundreds of reviews the band has received: "Thomas Walsh doesn’t like the term “powerpop” and has said that he considers Beatles comparisons to be “lazy”, but it would be difficult to imagine that people who dig the powerpop genre or are aficionados of the Fab Four wouldn’t be the ideal audience for Pugwash. Indeed, when watching the band live, McGee’s bass work sounds like he’s channeling McCartney at his most melodic and inventive. However, the band’s whole output is much more diverse and all-encompassing for them to be simply typecast as another bunch inspired by The Beatles. On your journey throughout this compilation, there will be more influences worn on their sleeves than you will be able to keep track of and I would hope that the listener will come to the same conclusion that I have; Thomas Walsh simply writes music that he would enjoy listening to." Get it now, one pressing only. £19.99 (white vinyl only now)