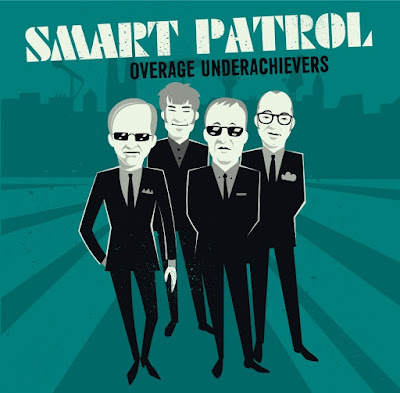 SMART PATROL - "OVERAGE UNDERACHIEVERS", another volume in our long running "Special Imports" series! These four guys from Munich joined forces to fuse classic songwriting of the sixties with the sound, power and attitude characteristic of the music revolution of 1976-1978 and this resulted in 12 one-of-a kind powerpop gems wrapped in a tailor-made suit of hooks and melodies on their new LP "Overage Underachievers".
But don't mistake them to be retro: they all started out in punk-influenced bands, so in the end they've only gone back to their roots, or as they sing in their tribute to Munich's Atomic Cafe: "It's time to get back to basics"
So what you get here is an album packed with perfect shots of power poppin' 70's mod-punk that would be all over the radio in an ideal world. If you dig the CHORDS, the INCREDIBLE KIDDA BAND, the POINTED STICKS, the PLIMSOULS, the YUM YUMS and KURT BAKER then you will dig this album. £19.99 including postage anywhere.