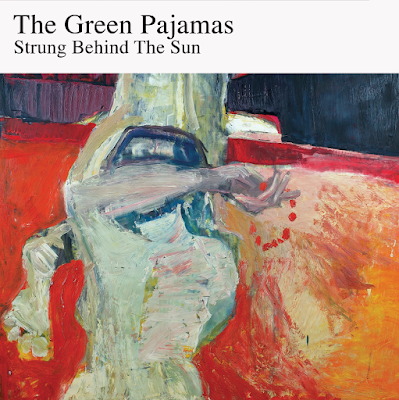 GREEN PAJAMAS - "STRUNG BEHIND THE SUN" (SUGARBUSH SB049), the latest release by Sugarbush sees this legendary and highly rated 1997 album as a vinyl issue for the very first time! An expanded 2LP set, with extra tracks, housed in a beautiful and higly detailed deluxe gatefold sleeve. Pressed on virgin 140gm vinyl.. This amazing album sound stunning on vinyl, Over 80 minutes of incredible music on vinyl. Only 300 pressed with only 250 commercially available. Out in late September, but listen here now:
Green Pajamas Strung Behind The Sun stream

Musically, to me, this is the best Green Pajamas album we have released, it's quality of songwriting and playing is simply magnificent.
Original release date: August 15, 1997 by Camera Obscura, Australia.

"With its Art Tatum shuffle, ghostly imagery and Middle East-meets-Middle England vibe, it's as fleeting and special as a dream about the most magical hippie summer you never had." One of the "Top 10 neglected American classics" - Tom Cox, The Guardian Unlimited

From the Camera Obscura website, 1997:
'The first new full-length CD of the Green Pajamas' 60s influenced psych-pop since Green Monkey/Bomp released the truly excellent "Ghost of Love" in 1990. Main songwriter Jeff Kelly has always been one of the US’s finest practitioners of the psychedelic pop song, and over the last few years his songwriting has reached dazzling maturity and depth, as showcased in his most recent solo album "Ash Wednesday Rain". Believing that "Ghosts of Love" was the Green Pajamas "Rubber Soul" and that Kelly and Co still had a "Revolver" in them waiting to be drawn out, Camera Obscura approached Green Pajamas to coax them out of their semi-retirement. The result is "Strung Behind the Sun".

'Over the course of 15 songs, the Pajamas stage the biggest comeback since Lazarus, and show why no-one can touch them in their chosen genre. "Strung Behind the Sun" is a dazzling ray fired into the prism of psychedelia refracting off in all directions. Lyrically, it is a winter record, and one imagines long creative afternoons spent in Seattle coffeehouses under siege from the rain. The listener is treated to songs about snow and Madonna complexes, family and strangers, love and loss. Standout Kelly’s tracks "The Brain I Realize" updating "I am the Walrus" and "Tumbledown Tess", written in the wake of his father’s death. Other band members also contribute in fine style, Joe Ross’s "anthemic "Graduation Day", and Eric Lichter’s "Scarlet Song" which climaxes the album.' SOLD OUT!