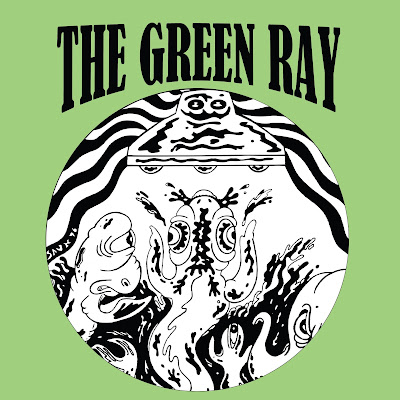 SOLD OUT!!
THE GREEN RAY "SELF TITLED" (SUGARBUSH SB073), long overdue vinyl pressing of their first full length album issued in 1996. The Green Ray formed out the ashes of two of the UK's best loved underground bands: HELP YOURSELF & MAN. However, Green Ray have now been a working band in their own right for well over 25 years. Much loved and highly collectable the previous two albums Sugarbush has released are much coveted by collectors, the first one - HALF SENTENCES - is now extremely rare and sought after.

This album, with art work by the mighty Savage Pencil and liner notes by the inimitable Phil McMullen, editor of the Terrascope, brings together two tracks from the band's now out-of-print vinyl only 12" "Sighs, Whales and Trees" (Shagrat ENT 006 12") with two extended tracks. Alongside the band's 'Float', a beautiful instrumental in the vein of Fleetwood Mac's 'Albatross' and Quicksilver's 'Gold and Silver', and 'Night Train To...' (both from the EP), there is the magnificent work out 'Black Eye Pea' where the band embarks on an extensive modal jam and best of all there is the epic 'Morning Song'.

Originally written back in the days of Help Yourself, the Green Ray re-worked it into one of their most special numbers which they still perform today. Produced by Man-alumnus and leader of Donovan's Brain, Ron Sanchez, 'Morning Song' sees the band at its absolute peak.

But if we have to single out the hero of the hour, honours have to be bestowed on the late Richard Treece who co-wrote the song with Malcolm Morley back in 1970, and here handles the lead vocal and plays some of the most spine-tingly licks of his career - you can indeed witness Richard's guitar howl again like a mescaline buffalo, as Phil suggests in his liner!(With thanks to Nigel Cross)