New release on Sugarbush! JEFF KELLY (of Green Pajamas) - "When The World Was Younger" only 100 copies for sale! 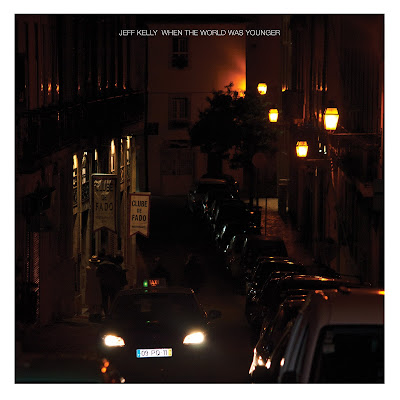 JEFF KELLY (of Green Pajamas) - "When The World Was Younger" (Sugarbush SB072), limited to around 100 copies on vinyl, this is a sure fire rarity right off the bat. The latest solo outing from Seattle's Green Pajamas mainman is another classic album. Kelly has said that he hopes that this album “is a little bit of something to help momentarily distract the senses, heal the heavy heart and uplift the spirit.”.  In trying to find his own way through these troubling times he has done just that for himself and anyone wishing to find a musically soothing escape from our daily reality.

This record is a bit of a continuation from last year’s Beneath the Skies, Under the River. Again, like that record, both Spain and Portugal are the main inspiration here, but this 12-song set it a bit of a hodge podge (not in a bad way, though). There’s four new songs as well as a few remakes of older songs and four singles, too. First cut “Of Missingness” has some of that wonderful flamenco -style guitar while the dusty “Black Eyes” has a bit of a Southwestern Giant Sand/Calexico feel to it. There a new version of an old song called “Autumn in Lisbon” which has swaying beat to it while things get smoky on the mysterious “Only Endless Tomorrows” and the record  ends with a lovely, acoustic version of “Christina Dancing”, Kelly’s tribute to flamenco dancer Christina Hoyos. As Kelly himself said, “The album is very nostalgic and about “missingness” and of longing for another place and time when the world was younger. We could all do with a little of that right now. £27.99 with free postage anyway. 100 copies only.