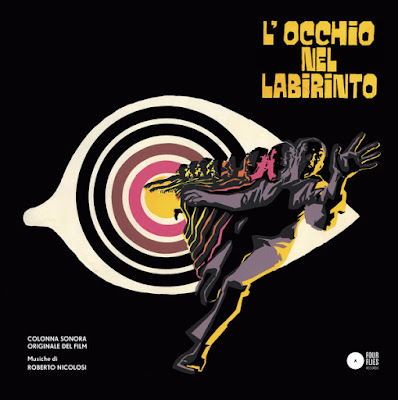 ROBERTO NICOLOSI - "L'OCCHIO NEL LABIRINTO / EYE IN THE LABYRINTH" (FOUR FLIES 19, ITALY IMPORT LP), the first ever official release for this unbelievable giallo score by ROBERTO NICOLOSI, composed for the experimental thriller by Mario Caiano in 1972.
Previously issued on the Fontana label in 1973 with the title “ATMOSFERA”, this is certainly one of most sought-after Italian jazz LPs for any serious collector, featuring a five-star collective of marvelous musicians such as GIOVANNI TOMMASO (bass), FRANCO TONANI (drums), ANGELO BARONCINI (guitar), ANTONELLO VANNUCCHI (organ), FRANCO D’ANDREA (piano), GIANNI BASSO(Tenor Saxophone), DINO PIANA (trombone), CICCI SANTUCCI (trumpet).
The result is a psych and dark jazz-funk sound that perfectly fits the anxious descent into the labyrinth of the human psyche.
This soundtrack is considered one of the best, still underrated, Italian soundtracks ever, as well as one of the most unforgettable Italian jazz sessions of the 70s. Similar at times to Miles David Bitches Brew but with more vairety and deeper Psychedlic touches, an absolute masterpiece and will be hugely cvollectable in due course.