THE WELLGREEN - "SUMMER RAIN" now out on Sugarbush Records, 200 copies only. 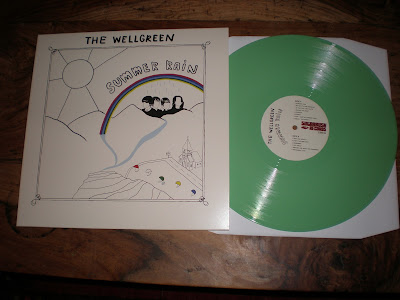 THE WELLGREEN - "SUMMER RAIN" (SUGARBUSH SB036), well what can I say about this album? Not much in words that actually conveys how effortlessly brilliant this album is, that is for starters. This is an amalgam of the best sounds that artists such as Emitt Rhodes, Blue, Bread, Big Star (yes, again!) and Paul McCartney made in the early to mid 70s. Don't get me wrong, this is a contemporary Scottish band put who have their feet firmly planted in the early 70s sounds of melodic guitar pop. The opener "Summer Rain" hits you with harmonies over a solid beat backing of simple guitars, piano and bass/drums. The second track is even better, "Maybe It's The Pressure Of The City Life That's Tearing Us Apart" is a wonderful song that reminds me of everything I love about pop. From then on there is no letting up and this album is BRILLIANT from start to finish.

The Junipers "Red Bouquet Fair" is now out on blue vinyl, 200 copies only. 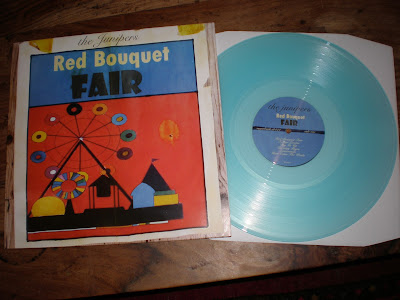 I'm now absolutely certain that Sugarbush Records' Markus Holler has managed to somehow implant a chip in me that relays to him exactly which albums I want him to release. His latest batch of releases are absolute perfection. There are four of them in total, but I'm just going to focus on my favourite of them today (more on the others soon).

The Junipers, for those who haven't been paying attention, are one of this decade's most important, unheralded guitar pop bands. Their previous album "Paint the Ground" is one of my favourites of the last few years. I'd previously thought of it as one of those rare, perfect pop records, but it can't quite have been as this new album is even better. While "Paint the Ground" had a lovely pastoral tinge, "Red Bouquet Fair" is much more of a classic pop album, with songs that reach back to the sixties for inspiration without sounding tied to that decade or overly reverential. It's obvious that these guys have fantastic record collections, but in no way do these songs sound like an attempt to replicate the music from those collections.

There are strong hooks on every single one of these songs, and these lads sure do know their way around a harmony; check out the lush vocal layering on "Summer Queen". Absolutely stunning. Elsewhere, they use period embellishments sparingly for maximum effect. Particularly effective is the 12 string guitar solo on "Like a Merry Go Round", while the sitar led "Her Come The Winds" is a marvelous psych-pop gem. And don't get me started on the amazing kaleidoscopic psychedelia of "Burning Pages".

And while classic harmony and psych-pop are the most obvious touchstones here, other influences rear their heads; "When the Bird Has Flown" is a lovely, moody choral harmony piece ala Midlake or the Fleet Foxes, while "Dig Me Up" brings to mind some of the brit-pop sounds of the mid nineties which have aged more gracefully than others.

Apart from the extremely solid songcraft, and those luscious harmonies, the main secret to "Red Bouquet Fair"s success is in the arrangements and production. It's all beautifully layered, with imaginative touches that create a distinctive sound for the band, while preventing any of the songs sounding samey. Or to put it in a simpler fashion, it's obvious that these songs are all the work of the same band, but each is a fresh creation which distinguishes itself from its predecessors.

It's the sort of album which should make you a little bit angry at the injustices of the world. Paradoxically, I'd also imagine that it's pretty much impossible to remain angry while listening to "Red Bouquet Fair".  This should by all rights be a major label release with constant airplay and household name status for the band, and had the Junipers been around to release this 50, 40 or even 20 years ago, that may well have been the case, but we don't currently live in a world where what the Junipers have to offer is in vogue with the masses. For us lucky few though, it's a comforting, magical experience. Absolutely wonderful.