KONTIKI SUITE - "THE GREATEST SHOW ON EARTH" (SUGARBUSH SB039) out now on vinyl, buy it here! 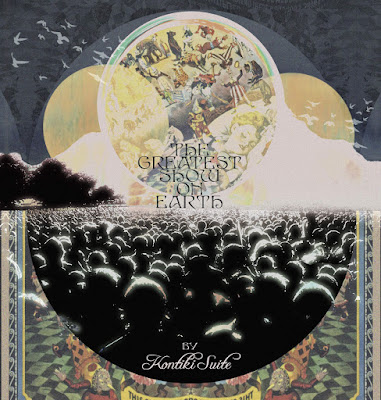 KONTIKI SUITE - "THE GREATEST SHOW ON EARTH" (SUGARBUSH SB039), this fabulous album sees a timely reissue on vinyl (only 300 copies) as we recently released their debut LP ON SUNSET LAKE. This album is equally as good and I am happy to let our friends at the ACTIVE LISTENER blog take up the story:
"Kontiki Suite proudly flies its Byrds banner via some obvious stylistic hat-tips to 1968’s "The Notorious Byrd Brothers". This time out, the band boasts a batch of impressive new Rickenbacker-based janglers (mainly from the pen of guitarist Ben Singh) and a tougher sound from the rest of the band (Jonny Singh, lap steel guitar; Marcus Dodds, guitar; Mario Renucci, bass; Chris Brown and Craig Bright on drums and percussion respectively). The result is a cohesive, 50-minute flight high above exquisitely atmospheric psych/country-rock/chamber pop soundscapes.
The opening moments of guitar/rim shots in the rousing, Golden Smog-like opener “Bring Our Empire Down” recall David Crosby’s serene “Dolphin’s Smile,” after which some Neil Young-like crunch is thrown in as the song gathers steam. “My Own Little World” features the kind of textured ‘n’ trippy triple-guitar interplay (including lap steel and 12-string Rickenbacker) that characterizes the overall tone of the album – tone that is often upended by deliciously abrupt shifts in tempo: the lads in Kontiki Suite are more than happy to jolt you out of the hypnotized state in which they deftly placed you. Occasional, judiciously chosen blasts of harmonica tug on the same heartstrings as in Big Star’s “Life is White.”
“Free From Sound” and “Here for You Now” are tremendous pop songs, the kind of tracks that, back in the day, would’ve jumped out of an AM radio and grabbed you by the throat. The former features a keening pedal steel hook that’s hell-bent on becoming your next earworm. The latter blends a “Ticket To Ride” beat with power-poppy rhythm reminiscent of Gene Clark’s evergreen “I’ll Feel A Whole Lot Better.” Remastered and re-cut for this new vinyl edition to offer an improved sound spectrum!