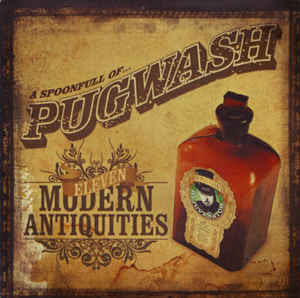 PUGWASH - "ELEVEN MODERN ANTIQUITIES" (SUGARBUSH SB084), finally released on vinyl. The only PUGWASH album not yet to be released on wax IS OUT NOW! This is available in two colours, 250 copies each. (Black vinyl and splatter vinyl)

"‘Eleven Modern Antiquities’ is a perfect power pop album, with a dazzling array of guest musicians, including Andy Partridge & Dave Gregory of XTC (Andy co-writes two tracks with leader Thomas Walsh), Neil Hannon of The Divine comedy, Michael Penn, Jason Falkner, The Section Quartet and Nelson Bragg of The Brian Wilson Band. The result is an amazingly awesome pop sound and best described by reviewer Alan Haber, “Walsh is a pop pundit who fuels his ideas with his deep-seated love of the pop form, whose admiration of the classic pop sound brought forth by bands like the Move and the Electric Light Orchestra and XTC knows no bounds.." (Powerpopaholic review)