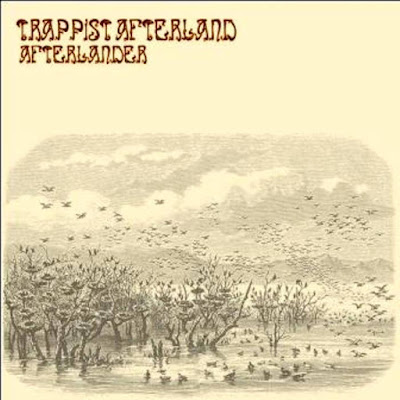 TRAPPIST AFTERLAND - "AFTERLANDER" (SUGARBUSH SB042), limited to only 200 copies, housed in a gorgeous single sleeve cover and completely remastered from the 1st pressing of only 99 copies which is now a major collectors' item! Melbourne based psych folk artists Trappist Afterland have been quietly but consistently releasing some of the most outstanding and distinctive albums in underground circles over the last four years or so. Consisting effectively of the trio of Adam Cole, Phil Coyle and Nick Albanis along with various friends and musical accomplices their use of unusual instrumentation and unique sound (as well as their easy but persistent way with a melody that will get its hooks in and not let go) marks them out as one of the most important and visionary bands currently working in the psych scene. Their new opus 'Afterlander' not only builds on the successes and strengths of past albums but takes the Trappists into a whole new realm of their own, with a set of assured, powerful and majestic songs tinged with mystery, ritual and beauty. t once otherworldly and yet also immediate and persuasively melodic, Trappist Afterland ably suggest a dark mysticism and esoteric sound whilst also maintaining a tight, rhythmic and controlled mastery of their song craft, similar perhaps to contemporaries such as Stone Breath, Six Organs Of Admittance or James Blackshaw. 'Saint Peter And The Rainbow's eastern drone leads into tense and intricate, inventive string work (instruments present on this album include bell citern, hammered dulcimer, bowed psaltery and lute), eerie backing vocals and strident tabla, propelling the song ever forwards. Fans of the afore mentioned bands, acid folk acts such as the Incredible String Band and COB and also of Michael Gira's work with Angels Of Light will find much to adore here.
(Courtesy of THE ACTIVE LISTENER blog). The sleeve also contains exclusive, specially comissioned for the SUGARBUSH RECORDS release, sleevenotes by DAVID TIBET.
Black vinyl only £19.99 including worldwide postage.