GREEN PAJAMAS - "SUNLIGHT MIGHT WEIGH EVEN MORE" on vinyl, out now. Buy it here. 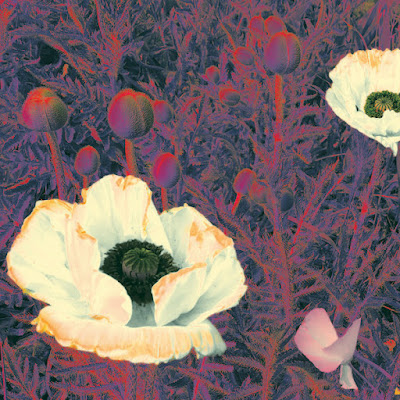 GREEN PAJAMAS-"SUNLIGHT MIGHT WEIGH EVEN MORE" (SUGARBUSH SB085), the brand new album by Seattle's finest ever Psych/Pop band. As ever I'm content to let Phil McMullen's words tell you how great this LP is:

"A new album from the Green Pajamas is always something to be celebrated, and this 16 song collection is especially welcome given that it’s all brand new material, the majority of which was written and recorded by Jeff Kelly. Not that there’s anything the matter with Joe Ross’s first written contribution since 2011, the gloriously singalong ‘Down to the Ocean’, or Eric Lichter’s excellent contributions ‘Sunlight’ and ‘Lover’s Lease’; but, well, even George Harrison only wrote one song per side for the White Album, and when there’s a songwriter of the calibre of Jeff Kelly in the band and he’s obviously hit on a rich seam, it makes sense to give him his head.

And head music is definitely what this record is all about. Readers will no doubt fondly remember the string of outrageously psychedelic albums the Pajamas recorded in the late ‘90s for what was at the time the next best thing to an in-house Ptolemaic Terrascope record label, Tony Dale’s Camera Obscura. ‘Strung Behind the Sun’ was a personal favourite, and it’s no coincidence that most of that was written by Jeff too. The new album is intentionally intended to recapture the whimsical experimental psychedelia that pervaded the band’s records of that era, and is sprinkled with appropriately exotic instrumentation, strong vocal harmonies and occasional birdsong, rainstorms and sound effects thrown in for good measure. It’s never less than glorious, and when Jeff kicks in with some of his trademark electric guitar licks it becomes absolutely outstanding: ‘Art School Blues 1979’, ‘High Tea With Miss Ava G’ and the album’s finest moment amongst a slew of fine moments, ‘Just To This’ with its middle-eastern backing, fine drumming and killer guitar break are all songs to treasure amongst a veritable treasury of songs.

Elsewhere ‘That’s Why Celia Can’t Fly’ has a Byrdsian jangle; ‘I’d Rather Be In The Sun’ is piano-led with hauntingly echoed vocals which adds a dash of melancholy – and fittingly bleeds into the next song ‘High Tea With Miss Ava G’ courtesy of the sound of a Portuguese rainstorm, which is a particularly Jeff thing to do. ‘Why Did You Do It’ has a heavier vibe and ‘I Don’t Believe You’ chills with a backwards girls school choir, and it’s left to ‘Hello, Hello’ and ‘Falling In And Out of Love’, both supremely Beatles-esque, simply great pop songs, to lift the spirits before the closing ‘Holly.

Released at a time when the world is debating the merits of vaccinations, this is exactly the shot in the arm we all need, guaranteed to put a smile on your face, make you long throw your arms around your loved ones and get us all up and dancing. Or at least nodding along, given that we’re all getting older."

Only 290 copies pressed with only 200 for sale to the public. 14 track special vinyl version. In stock. Please make sure you choose the correct postage option below: