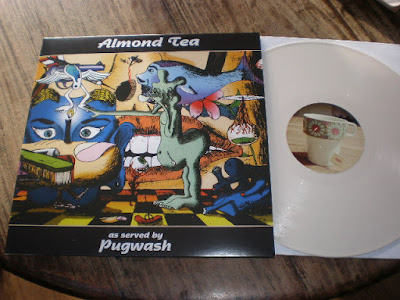 
The Ptolemaic Terrascope have this to say about this classic album:
" Originally released in 1999, ‘Almond Tea’ by Pugwash (not the former drummer of the Man band...) is brimming with sweet melody, the tunes reminding me of  ELO mixed with Radiohead, whilst some of the melodies suggest that time when Oasis wrote good songs that crawled under your skin. Opening with ‘Missing The Point’ the listener is immediately drawn into Pugwash's world and you find yourself drumming along to the tune whilst second guessing the lyrics (or maybe that is just me), the song having plenty of energy and a powerful production that allows it to soar from the speakers. Absolutely beautiful, ‘Finer Things In Life’ sounds like a Radiohead ballad, the lyrics catching hold of your heart as the music drift around them with a gentle jangle. With a lovely shuffle ‘Shine On Norvell Jefferson’ could have come straight from the White Album, the McCartney version, whilst ‘Two Wrongs’ could be a lost Brit Pop anthem its swagger tempered by the lovely ‘Getting Me Down Again’, the perfect end to side one. Throughout the album it is the song that is important and you can easily make comparisons, however the whole collection is a lesson in the art of melody and dynamics, the flow of the album perfectly judged with the melancholy beauty of ‘Always Be’ paired with the acoustic strum of ‘Could It Be The Same’ side two slowly getting louder until ‘Obvious’ releases the energy that was building, more Lennon than McCartney and definitely Psychedelic with phased guitar and plenty of attitude. Finally, ‘ Nonsense’ leads us out sounding like (pointless comparison time) like Dodgy covering a lost UK Psych tune, a great tune however your ears hear it completing another great album from Sugarbush, something I seem to be repeating in this review." (Simon Lewis)