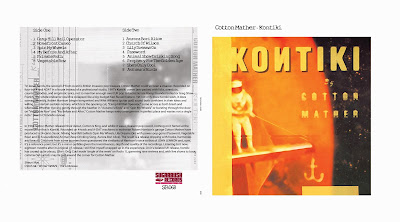 COTTON MATHER - "KONTIKI" (SUGARBUSH SB068), the first issue in our micro press series. Issued for Sugabush collectors and customers primarily in a super limited edition of only 120 copies! Most were on pre-order from a few years ago, when we got the go ahead from Robert of the band to issue this on Sugarbush. It then sort of went quiet for a while but here we finally are. The release is in mid-April but you can order copies here and now. If you've not heard of this lovely album here are some words from an original review in 1997 (see below). It is pretty obvious that our own ORGONE BOX album (made by my old bandmate / mate RICK CORCORAN issued on vinyl on Sugarbush some years back but originally issued in Japan in 1996) must have been a huge influence on COTTON MATHER who got most of the hot press for their release. But us in the know understand the roots of KONTIKI. Anyway read on and order, because this will sell out super quick, esp since most copies were reserved some years back.

"The songs themselves and the excellent performances of the musicians playing them make this album magical. The record’s standout song, My Before and After, is an example of the perfect popsong just like Badfinger’s No Matter What and The Who’s I Can’t Explain. Containing hooks galore, My Before and After perfectrly captures the desire, hope, and longing of all-consuming love that music was invented to express just like those other classic songs. Not that My Before and After is the sole reason to check out this album. Indeed, what comes before and …um…after that song is just as musically tasty. The album as a whole has nary a flaw. But that song, well, is one of the songs all songwriters worth their salt wish they wrote." (popgeekheaven review 2012)

Buy it now, limited to 120 copies only on audiophile 140gm vinyl remastered from original source. £27.99 including postage anywhere: