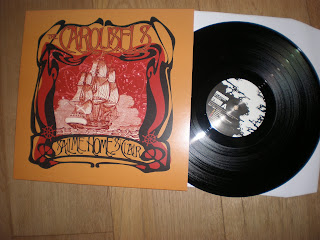 THE CAROUSELS - "SAIL ME HOME ST. CLAIR" (SUGARBUSH SB037), finally released is this Scottish band's second long player. Their first album - you may recall - was highly praised and received excellent reviews and (a little know fact) is actually Sugarbush' best ever selling album in terms of numbers sold of both pressings over the years. In many ways this was a real surprise but then again a band of such heart and soul and invoking the spirit of Gene Clark, Gram Parsons and Sweethearts-era Byrds ought to sell a lot of records. Especially when the songs are so poignant and beautiful. The band have built a firm worldwide following with tours of the continent in their back (denim and patchwork) pockets. This second LP carries on where the first one left off with another excellent clutch of songs (see track list below). £19.99 (with no extra postage charged)

Here are some of the nice things people said about the first album:

Highlands-based combo The Carousels echo the likes of Teenage Fanclub or Whiteout with a dose of The Beatles' 'Please Please Me' thrown in for good measure on countrified rocker 'Call Along The Coast'.' Drowned In Sound

'The Carousels deliver an important reminder that it's quite possible to be psychedelic without overloading the eardrums, opting instead for a Byrds-flavoured twelve-string jangle.' Louder Than War

'Melodious and up-tempo, the Live Revolution rendition of The Carousels' Mayflower blows its studio recording out of the water. With vocals perfectly spun among sunshower guitars and heady percussion, intricacy is intensified in the live arena yet made to sound effortless.' Britpop News

'Moving more in to the more pop arena, the octahedron of sound is squared up with The Carousels, whose song craft is very reminiscent of the Liverpool band Shack in their pomp around the release of the HMS Fables album.' Qromag

The Carousels take influence from Gene Clark, The Byrds and Gram Parsons and have been compared to fellow Scots Teenage Fanclub, Whiteout and the Cosmic Rough Riders. They have received multiple plays and Song of The Day on KEXP Radio for Marianne and have received airplay by Steve Lamacq on BBC6 Music.