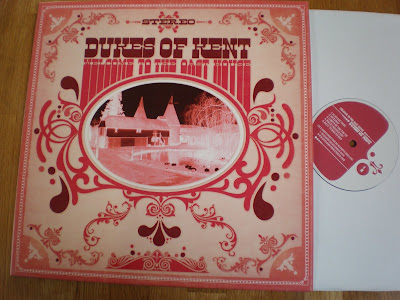 Dukes Of Kent-"Welcome To the Oast House" SB300, this is the album that kicked the Sugarbush label back into life in 2012. Recorded over two years this was always meant to be an album to bring happiness to ourselves and the plan to release it on vinyl was almost an afterthought. But we did it and now we are an extra 84 releases (or so) down the line, 10 years later. I have just 10 copies left -  it was limited to 500 copies.

Here is what others said about it at the time:
" Tracks chock-full of chiming guitars, shimmering harmonies and West Coast licks with influences ranging from the Byrds through Crazy Horse to Tom Petty and Joe Walsh: a melting pot of pop,rock, psych and folk with great gobs of swirling guitar which will assuredly set feet tapping and shims shimmying. Limits of the Truth' is one of my favourite cuts on the album, reminding me strongly of early Jackson Browne at the outset. It's the start of a trio of great numbers Side One's closer 'Blue Turns to Red' is just beautifully constructed and performed - a song to be heard and remembered for long after the sun sets over the distant horizon."

"As I listened to “When I Needed You” I was reminded of an early Strawbs song “We’ll Meet Again Sometime.” “Blue Turns to Red” is a day after song about drowning your sorrows, a wonderful blend of country and psychedelia with the song ending with feedback and experimental sounds. “Ever Day Brings Something New” features harmonica and baritone vocals similar to the Soft Hearted Scientists, as well as another great psych rock guitar solo. “Lay My Burden Down” has a 70s acoustic guitar retro sound that takes me back to my youth. “Water” is another acoustic guitar song that veers into the experimental realm while remaining melodic. And the album closes with “Angels and Ghosts,” an excellent country folk singer songwriter song that made me think of Townes Van Zandt, plus another cool electric guitar solo that takes off! This album is for fans of the six-string guitar and West Coast country rock."