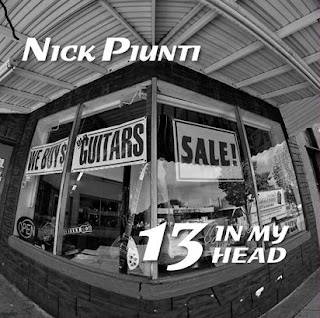 NICK PIUNTI - "13 IN MY HEAD" (SB700), limited to 300 copies
Amazing and tough DETROIT Power-Pop album, with song after song a classic. If this was the 1970s Nick would be a superstar. Shades of TOM PETTY, AEROSMITH, THE SWEET, THE BYRDS yet this is a very original and unique album. Has won award after award in the music press and Nick also featured on MOJO magazines cover mount CD back in November. This is a truly superb album with song after brilliant song with great harmonies and brilliant guitars. Nick has been making great music for 20 years. Now that's pedigree.

It’s probably fair to say that Nick Piunti is a bit of a veteran in the power pop world given he goes way back to 1975. That’s not to say his music is any less relevant today, thankfully the need for hummable melodies and classic pop songs remains. In this great new release he has created an album which has a power pop feel with a modern rock sound. In many ways it follows other great acts from The Replacements through Redd Kross and The Fountains of Wayne, which have created a magic line of modern pop rock.
The album actually opens with the title track and it’s a brilliant opening number which is a great power pop song. It has that feeling of youth and just carefree fun that we all had at the age of 13. “On The Way Out” keeps it going with another really smooth and catchy song with some great Na Na Nas in it! If hearing this song doesn’t make you at least nod your head then you’d better check your pulse.