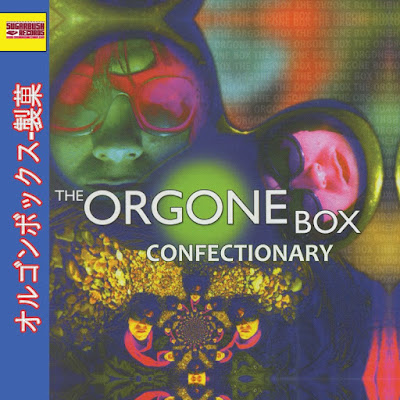 ORGONE BOX - "CONFECTIONARY" (SUGARBUSH SB069), back in stock after last year's black vinyl micro pressing sold out in two weeks or so this issue is on gorgeous transluscent GREEN VINYL! So much has been written about this classic album which was originally released in Japan in 1996. Sheffield native Rick Corcoran, after playing in Sugarbush Records' band THE SILENT BLUE from 1990 to 1991 took off on his own and formed ORANGE who hat a hit in 1994 with the classic Britpop jangler "JUDY OVER THE RAINBOW".

Sessions at Rockfield with Gus Dudgeon for an album on Chrysalis then collapsed in a haze of hash smoke and overspending. Rick then got a deal in Japan and was given an advance to record this album. It was issued in Japan (only) in 1996 and then - via a strange route (involving former bandmate Tam Johnstone, son of Elton John's Davey Johstone who played in both Silent Blue and also on the Orgone Box album) - was released by my old mate Bill Forsyth via his Minus Zero record shop. It then hit the Psych / Pop world with a crash and over 4000 copies sold, making this the album of the year (or decade) on numerous lists in 2001. To say this has become a cult album is an understatement. This record DEFINES cult album! Shades of Beatles, Guided By Voices, The Kinks and Cheap Trick (after a heavy dose of LSD!) this incredible record even guided and defined COTTON MATHER'S KONTIKI which was released shortly after. This edition is of only 200 copies which will, I promise, become sought after collector's items in a few years time.

On 140gm GREEN VINYL and sealed. Buy it now. (Note slightly different postage rates for Uk and outside UK!)